In my last post, I introduced the concept of the 4 Stages of Learning, today I want to expand on the first two of these; 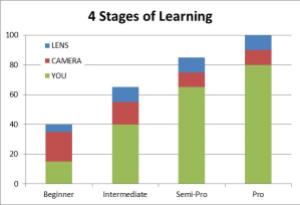 As I described before, someone who is unconsciously incompetent (meant in the nicest possible way of course), they don’t know how much they don’t know.

Just because they are a beginner doesn’t mean they can’t take a good picture – anyone can bag a great shot if the conditions are right – but it means that on average the bulk of shots have room for improvement and the strike rate of good shots to poor ones is low.

The beginner will typically be working in Auto or Program mode, hence the camera plays a bigger part in any given photo than the person, as it is the camera that is looking at the scene analysing the situation and selecting what it thinks are the best settings.

Lens quality (and speed) have very little to do with the end result. More than likely, the person is using a compact or bridge camera at this stage or an entry level DSLR and kit lens.

Progression from this point is easy, the only way is up!

Through learning and practice anyone can quickly improve their skill level without needing to necessarily spend money on kit.

Reading blogs, watching videos on YouTube, downloading eBooks, buying real magazines (which often have DVDs full of helpful hints and tips too) are the best ways to progress and begin to learn about things like; Exposure triangle, aperture and shutter priority modes, f-stops, rule of thirds, negative space, panning, freezing motion, long exposure, shooting in Raw, f/16 rule etc. etc. and I’ll be adding posts explaining all these things and more in the coming weeks and months.

Of course getting involved on-line with sites like Flickr are a tremendous help too – there are always people willing to offer advice and millions of images to inspire you.

Someone who is consciously incompetent (again meant in a nice way), they now know and appreciate how much they don’t know about photography as well as knowing most of the basics.

At this level, you are starting to take a lot more control of your camera. Probably shooting in aperture or shutter priority mode (and understanding which is best for each situation), starting to get into post processing (perhaps with Lightroom or even Photoshop).

Using skills like rule of thirds intuitively and getting a better hit rate of good shots. At this point you’ve probably also bought a DSLR and a couple of lenses (a ‘nifty fifty’ 50mm f/1.8 is a good place to start with prime lenses). Also starting to get an idea of which areas of photography are most appealing – landscapes, portraits, street, nature, architecture etc. – but still taking all sorts of pictures all the time to learn.

It’s probably at this point that the limiting factor for some shots will be your equipment (not you), especially if you have a compact camera or a DSLR with kit lens. Chances are you’ll want something that shoots wider, or longer, of faster, or at higher ISO, or has hot-shoe flash, or shoots Raw, or shoots a faster frame-rate. At this point upgrading becomes worthwhile, but (as in the graph), the main contributor to your photographs is now YOU not the kit.

As for the beginner, there are a wealth of ways to improve. Perhaps the most important is practise – don’t let more than two days go by without taking a photo. Get to know your camera’s modes and settings better – read the manual again, because you read it cover to cover when you got the camera, right?

Sites like Flickr are tremendous here – there are groups that challenge you to take a photo week (or a photo per day if you’re up for that), or say 100 specific pictures over the course of a year, or one of my favourites 115 Pictures in 2015 which I’ve been doing since 112 in 2012 so am becoming something of a veteran now.

Start to develop ‘muscle memory’ for techniques like changing aperture (or shutter speed) or adjusting ISO or white balance so that you can do it all without taking the camera from your eye. This will really help when you’re on a shoot and don’t want to miss any action.

Next time Semi-Pro and Pro.