Following on from the square crop topic last week, I wanted to talk a bit more about cropping and aspect ratio in photographs.

Firstly, there are a few “rules” to know. I’ve put in the inverted commas because there are no real rules in photography only guidelines. A few of these that relate to cropping and aspect ratio are;

So which should you choose? Well it depends on the composition and the look you’re trying to achieve. Typically portraits are vertical but there’s no reason why you can’t take a landscape shot of someone with lots of negative space;

And similarly a vertical shot of nature is useful, especially if you want include plenty of foreground elements and sky as with this Infra red shot of a local pond.

Having said all of the above, when you crop an image try and stick to a recognised aspect ratio if you can. Otherwise it starts to look like you’ve cropped in a particular way to get rid of an object that was distracting in the frame. This is especially true of images that are nearly, but not quite, square.

For a while, square shots were the only type of image you could upload to Instagram. This was one of the main gripes from people using Instagram. So important was the ability to change to a different aspect ratio that apps such as ‘no-crop’ were developed to automatically add plain borders around portrait or landscape images to enable non-square shots to be posted.

I have to say that even though you can now post landscape and portrait images on Instagram, I still prefer the square format – with no-crop to add a border if necessary.

You should also consider if you are going to be printing the image, as the different ratios will force you to crop an image a little bit; 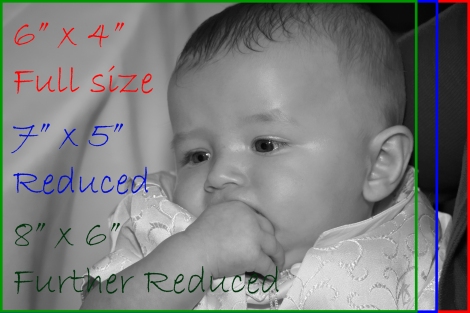 When cropping, there are a few things to avoid such as cropping at the ankles or knees or wrists of a person – this just looks odd. Don’t crop and leave a small bit of something sticking into the frame either, this is distracting. Don’t crop objects too close to the edge of the frame – they normally need some room to ‘breathe’.  But it’s OK to go in close if you want to – even if it means cutting off the top of someone’s head.

For a much more detailed discussion on cropping, Gina Milicia has a really helpful podcast episode on the subject which you can listen to HERE.